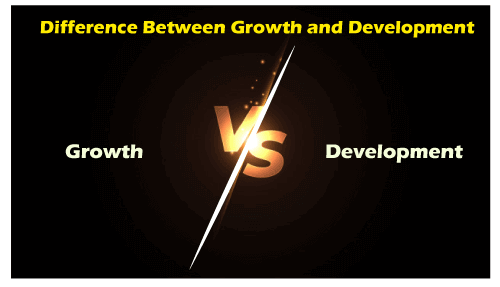 Difference between growth and development

We live in an era of technology, which demands the complexity of business environments. Technology has slowly changed the world into a global village, where it became vital for each country to grow. The only way to live in peace and harmony is when each country struggles to grow and develop its economy. Growth can be defined as the increase in the per capita income of a nation. The development of a country is more complexed to understand compared to the growth of a country.

Today in this blog, we will find out the actual meaning/characteristics of growth and development, their functions, and differences.

What are growth and development?

Economic Growth is the rise in the production of goods and services per person in a country. This rise and fall can be measured to compare the economic growth from one time period to another. Economic growth also considers an increase by various factors like technology, human capital, labor forces, capital goods, and new territories.

Economic development of nations compares the living standards of a low-income economy nation and a high-income economy nation. Apart from calculating economic growth, economic development includes many other factors like market conditions, working conditions, health, education, and policies. The story of countries is poorly affected due to pandemics, wars, and several other factors. e.g., the recent coronavirus pandemic of 2019 is continuously affecting the development of countries till now. 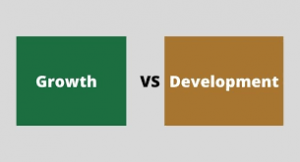 What are the differences between Economic growth and economic development?

Let’s have a look at those bases on which we can compare economic growth and economic development.

The development of an economy is a long-term process compared to the growth of a country that looks at short-term effects.

The development of the economy is a continuous process, whereas the growth of an economy is for a specific time.

Developing countries consider their Economic development as a vital part of the prosperity of their country, although they know it’s a long process. Developed countries prefer to look into their economic growth as they demand regular statistics for their nation’s income change. However, both functions measure the development of a country. But they choose different ways and mediums to calculate it. They are very similar and very different at the same time.

Like to clear this point of view that economic growths are not the only measure to describe the developments of a country. There is more to it.

Difference Between Antigens And Antibodies

Antigen and antibodies both play a vital but different role in disease, illness, and recovery in our body. One wants to create destruction or disturbance...
Difference between

Difference between Private and Public Company

Public Limited Company According to the companies act 2017, the company in which liability of shareholders is limited. And its shares can be quickly sold and...
Difference between

Difference between home and house

House and home are commonly used words and usually interchangeable in regular conversations. However, there is more to it. These two words are similar but...
Difference between

Difference between prepaid and postpaid

Can you imagine that there are more than 8 billion mobile subscriptions recorded to date? The number of people using mobile phones is increasing—the difference...
Load more